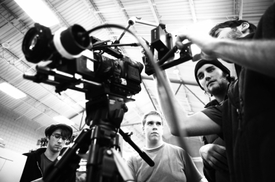 Santa Clarita has long been known as Hollywood's backlot. Because of its close proximity to Hollywood and LA, its scenic backdrops, and money saving filming incentive programs from the City, Santa Clarita has long played parts large and small in TV and movie productions and movie scenery, stretching back to the early days of film history. This page provides a list of what has been filmed in Santa Clarita, CA.

Video: "I Film in Santa Clarita"

Below is a list of filming locations from IMDB. Click on any of the links to see more information about the movies filmed at those locations:


See more of SantaClarita.com by logging in
Your online community neighborhood for Santa Clarita-area residents.
Log InSign Up
Log InSign Up
Kosmin Media