View from atop Mint Canyon
The Canyon Country neighborhood occupies the central and eastern portions of the City of Santa Clarita, in the Soledad and Mint Canyon areas. With a population of roughly 60,000 people, Canyon Country is the largest community within the City limits.

Canyon Country's history dates back to the mid 1800's. In 1872 Colonel Thomas Mitchell created the first school, now Sulphur Springs Elementary, which is Santa Clarita's first school in the area. The Canyon Country community has gone by various names in the past, most notably "Solemint," a name created by the combination of the "Soledad" and "Mint" canyon names. In 1968, by popular vote, the area was renamed to "Canyon Country". 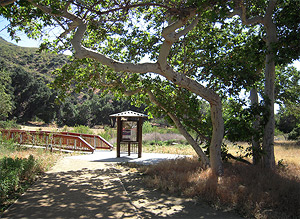 Placerita Canyon Park
Currently, Canyon Country serves as both major residential area, and popular commercial/retail area, that is still quickly growing. Housing options are varied, from high end homes near the tops of the canyons, to more affordable housing options along the main road arteries throughout the neighborhood.